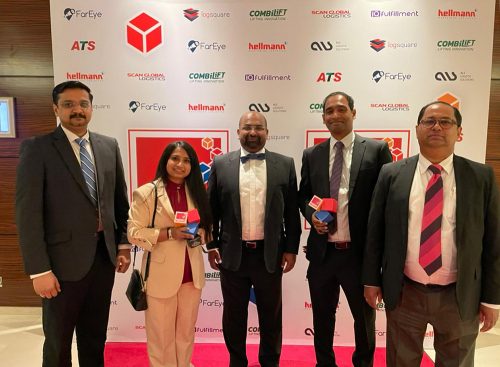 Navigators Shipping and Logistica, from Sharjah, UAE, member to Priority Cargo Network, won 2 prestigious honors at this year’s Logistics Middle East Awards. The night was truly momentous for the Team Navigators who were present at the awards event in Dubai on the 31st of March. Team Navigators walked away with 2 honors in the most prestigious categories. The first award was for the Breakbulk Operator of the year and the second award was for the Bespoke Logistics Project of the Year.

The award was constituted by the Logistics Middle East/ ITP Media Group to honor key prominent leaders and excelling enterprises from across the logistics and supply chain domains to celebrate their most remarkable ventures and praiseworthy achievements in the past 12 months.

“This award is a great honor for us and a prodigious reward to our aspirations. As a team, all our members played a remarkable role for this praiseworthy achievement. We wish to extend our sincere gratitude to you, as a respectable and trustworthy partner who have stood with us in our vicissitudes of fortune,” mentioned Navigators’ Corporate communications Department.

Navigators won both the awards for successfully handling the Etihad Rail Project, which was considered one of the most prominent and promising nation building project happening in the UAE, presently.

Navigators Shipping and Logistica LLC has played a crucial role in the Etihad rail project by handling the import, clearance, and transportation of various Structural and Instrumental Units during the progressive stages of the project. The ocean freight cargo, which was brought to the Jebel Ali port, Dubai and DWC Airports from various countries has been cleared with close coordination with customs and port authorities. A special team was created to closely manage the port operations.

The cargo that included the structural and instrumental units for the Etihad rail project was further moved to the various rail site project destinations with perfect planning and timebound precision. Close coordination with the team at Etihad rail project division, was effectively carried out at various stages of the project cargo movement.

Being an ongoing project, structures like steel bars, bearings and instruments weighing 15,000 tons of cargo has been moved so far. The cargo volume of 26,000 cbm was moved in more than 100 shipments to different locations in the UAE. NSAL is proud to mention that opportunity for associating with such an iconic project has brought in much appreciation and respect for our company.

Logistics Middle East Awards night which was organized at the Grosvenor house in Dubai, brought together eminent personalities and reputed corporate companies from amongst, Shipping, Logistics, Airlines, and technological domains. The event is considered as one of prominent industry events in the GCC organized to celebrate praiseworthy achievements from within the logistics fraternity, organized by the ITP Media group and Logistics Middle East.