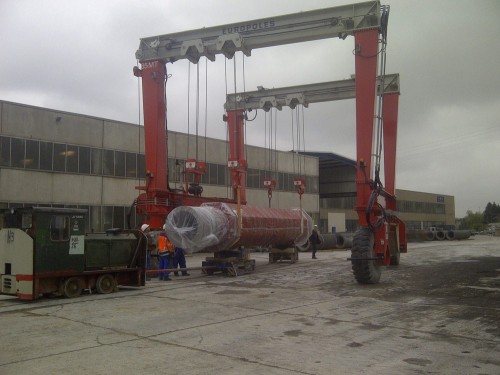 Alexander Global Logistics, member to the Cargo Equipment Experts CEE network in Germany, kicked off a new project for Algeria:

In Algiers, the world’s third largest mosque, named Dschamaa al-Dschasair, is being built right now and Alexander Global Logistics Germany is proud to announce, that they won the contract to transport 682 white-covered-concrete-columns for the outside wall-construction of that mosque from Germany to Algiers.

The very sensitive columns need a special packing, extreme care during all steps of transport and also smooth handling. the Columns are measuring upto 22 m in length and upto 1,62 m diameter with single piece weights upto 35,3 tons each.

Alexander Global Logistics is in charge for everything, i.e. packing for rail-transport at customer’s premises, rail-transport to load-port, handling, inspection with their own surveyors and final packing in load-port, export-custom’s clearance, sea-transport and handling in discharge port of Algiers.

The preparation for this job took about one year now and the 28.000 frt-contract was won by Alexander Global Logistics against fierce competition of well-known multinationals of the forwarding-community.