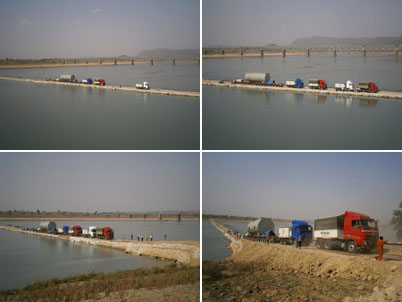 Allcargo Logistics Limited won the contract from Reliance Infrastructure Limited to handle and transport 76 units of super over dimension cargo (SODC), from Haldia port (near Kolkata) and Nhave Sheva port to the Sasan site, where Reliance Power is setting up a power plant.

25 SODCs had to be transported by barges on the Ganges River up to Zamania (in the state of Uttar Pradesh) located 1,200 km away. And from Zamania by road to the site which was another 350 km. The other SODCs, including the de-Aerators (each weighing 152 tons and 42 meters in length) had to be transported from Haldia Port by road. All these had to be transported across places where there were no proper roads or jetty at the riverside. En route, the Allcargo team built causeways and bypasses through rivers, crossed a multitude of railway lines, blasted hill sides to take turns with their long trailers, and moved for over 100 km in terrorist infested areas.

But the biggest challenge was the crossing the Son River, which was in spate for the first time in 32 years, due to an overflow of water at a dam located nearby. The project team needed to build a bypass that was strong enough to carry a 345 ton generator stator. The Allcargo team liaisoned with and pursued the local authorities to reduce the waterflow from the dam, so as to build the bypass. It took 1.4 million sandbags with the help of 300+ laborers, dozers, levelers and 4 months to complete this.

The first Generator Stator Unit crossed the Son river bypass successfully on May 23, 2012. And the balance two have been successfully taken across the river the next day.

Commenting on this, Mr. Shashi Kiran Shetty, Chairman & Managing Director, Allcargo Logistics Limited said, “The project team has done a wonderful job in building this bypass and transporting heavy equipment across the raging river. Congratulations to the team for carrying out such a challenging task successfully”.

With extreme precautionary steps and strategic and systematic planning undertaken by Allcargo, the logistics movement of the generator stator and other equipment are being successfully delivered in an efficient and effective manner.

Allcargo has handled 7 of the 9 Power Projects of Reliance Group in the last 6 years, and is proud to be a lead innovative partner in India’s infrastructure and power growth story.