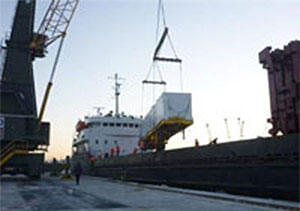 V. Alexander Germany, member to the Cargo Equipment Experts CEE network, in a concerted operation with their staff at V. Alexander CIS loaded a project of approx. 1.500 frt from Ravenna/Italy to Rostov/Don in Russia with on-carriages of the complete lot to the Moscow region.

The cargo was a complete asphalt-plant with overdimension pieces and heavy-lifts upto 30 tons. Apart from supervising and organizing the loading-operations in Italy, V. Alexander also acted as certified surveyors.

Compressor Stations from Germany to Russia

The company just reported finalizing another very challenging project for approx. 1.700 frt of compressor stations from various loading places in Germany to the Russian city of Vladimir, some 3.800 km south-east of Germany. The biggest units were weighing 42 tons. The weight and dimensions were not so much the challenge this time, however, there were others (like for a previous transport done by V. Alexander to Izhevsk/Russia). The final Russian receiver was a military-base and a lot of extras were required such as block-customs-clearance, extremely precise pre-notices about arrival of trucks, names of drivers, id-documents of drivers, custom’s convoy on Russian territory.

On a distance of 3.800 km of course this was not so easy to be organized “just in time”, especially since the trucks also had to overcome still some hard winter-conditions on a number of roads in Russia. V. Alexander mastered all these challenges 100% in close co-operation with the staff of their V. Alexander-office in St. Petersburg. Finally, the own V.Alexander-Germany-surveyor flew to Vladimir and did the professional survey in Russia for both the seller and the buyer – and all was in good order and condition. The total number of loads was 35 trucks incl. 2 special transports.