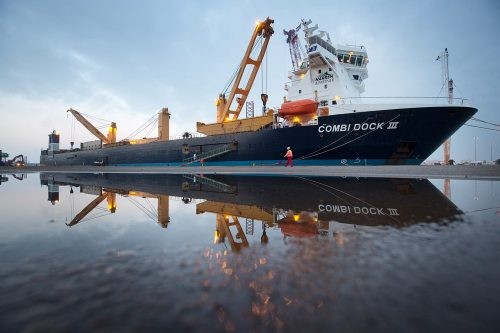 Stiftung Hamburg Maritim (Hamburg Maritime Foundation) chose Bremen-based heavy lift expert Combi Lift as its logistics partner for the transport of the historic windjammer Peking. The steel-hulled, fourmasted barque will be carried home to Germany this summer on-board a Combi Lift ship. Combi Lift, founded in 2000, is a member of the Harren & Partner Group.

At the end of June 2017, Combi Lift’s semi-submersible vessel Combi Dock III (Loa 169.40 metres, 11,000 tdw) will carry the tall ship to northern Germany to be the centrepiece of a new EUR 120 million museum complex under construction in Hamburg’s harbour. Peking has spent more than four decades at the South Street Seaport in New York City, USA. However, extensive repairs and maintenance were not carried out at this time. In September 2016 she was taken to Caddell Dry Dock, Staten Island, to spend the winter.

Bringing the Peking back to Hamburg has been a long time in the planning. “Getting the Peking home was a 14-year courtship,” explains Alexandre Poirier, naval architect and project engineer for Peking at Stiftung Hamburg Maritim (www.stiftung-hamburg-maritim.de). “We were finally able to get the financing for the harbour museum. Peking will be the flagship of the museum. It will be re-rigged and some of its historical interiors restored or recreated. The entire work will take about three years.”

The windjammer has a length of 115.5 metres, a beam of 14.3 metres and 4.2 metres draft with a gross weight of 3,700 tonnes. “It is not particularly heavy, relative to say, a military vessel,” Alexandre Poirier says. “But it is long and fragile. It has 3 to 4 millimetres of hull plating left at the waterline, out of an original thickness of 15 millimetres or more.”

Combi Lift engineers have developed a sophisticated concept to bring the Peking home safely. Combi Dock III will make use of its flo/flo ability: “The ballast tanks will be flooded to lower the cargo deck below the water’s surface, allowing the Peking to be moved into position for loading. It will be loaded stern first,” says Peer Kelch, chartering manager at Combi Lift. “The tanks are then pumped out, and the deck rises to shoulder the load. The various tanks can be pumped separately to balance the cargo. After seafastening with more than 70 bottom and side support structures, the Peking will be carried piggyback across the Atlantic Ocean.”

Loading and seafastening in New York is estimated to take three to four days, and the crossing will take about twelve days. The restoration work of the tall ship will be carried out by the Peters Werft in Wewelsfleth, Germany.

The Peking was built by Blohm + Voss in 1911 and sailed as one of the legendary “Flying P-Liners” of the German shipping company F. Laeisz. It was one of the last generation of windjammers used in the nitrate and wheat trade around the often treacherous Cape Horn. At the end of June 2017, she will make her last major Atlantic crossing.

About Combi Lift:
Over the last 17 years, Combi Lift’s experienced mariners and engineers have become experts in the worldwide marine transport of heavy lift and project cargoes. From the outset, Combi Lift has focused on developing smart and efficient engineering solutions for complex logistical tasks. The Harren & Partner Group affiliate provides clients with tailor-made solutions that suit individual demands and expectations, developed in close cooperation with expert teams.

Combi Lift is a member in Germany to the Cargo Equipment Experts (CEE) network. 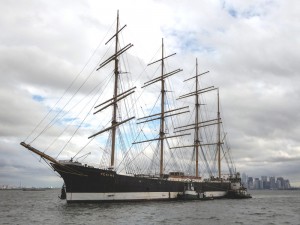