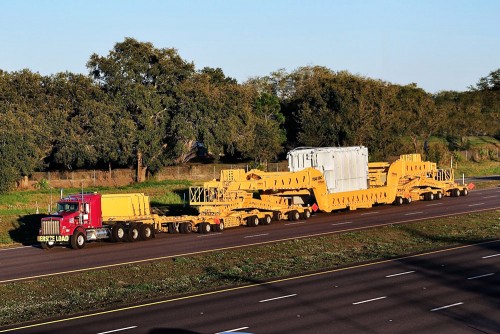 Crane Rental Corporation, member to the Cargo Equipment Experts CEE network in USA, recently hauled a transformer in central Florida. The transformer weighed 360,000 pounds, and loaded height was 17 feet, eight inches. The dual-lane Trail King trailer used for this job was made in 2013 to Crane Rental Corporation’s specifications. The innovative, high-capacity trailer features telescoping axles that extend from 12 to 20 feet to accommodate over-dimensional loads and more evenly distribute loads over bridges and culverts. It offers suspension beam, perimeter deck, dollies, or bolster options.

At the initial storage site, the team loaded the transformer onto the 24-axle dual-lane trailer using Crane Rental Corporation’s 700-ton gantries. When the load arrived at its final destination, the transformer was trans-loaded by the same gantries from the dual-lane trailer onto Crane Rental Corporation’s 12-line Goldhofer self-propelled modular hydraulic platform trailer in order to maneuver through the tight site.

Once in the substation, the hydraulic trailer positioned the transformer exactly where it was needed. Then the 700-ton gantries were assembled for a third time to offload the unit to its final resting position.