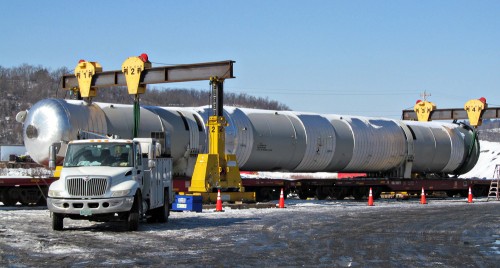 In February and March 2014 Crane Rental Corporation, Member to the Cargo Equipment Experts CEE network in the USA, was proud to be part of the team moving two “super loads” nearly 30 miles in the northeast United States. A tower, used to refine ethane from a natural gas stream, needed to be transported from a rail spur to its final destination at a natural gas plant. The tower’s movement was covered by local newspapers and television, and sometimes drew crowds of up to 200 spectators watching it make tough turns!

The “super loads” were each 129 feet long, 14 feet wide, 510,000 pounds, and about 17 feet high on Crane Rental Corporation’s Goldhofer multi-axle trailer. The 27-mile route was chosen and planned over the last year by a team that included the state’s Department of Transportation in order to travel safely to the tower’s destination. At a maximum speed of 5mph the tower’s journey was expected to take about four days, but thanks to cooperative weather and an expert team, took less than three.

Crane Rental Corporation has been “selling nothing but service” since 1960. In addition to crane rental and specialized rigging services, CRC is proud to offer several self-propelled modular transporters in its heavy-haul fleet, and a 200-ton capacity dual-lane transport trailer with telescoping axles to evenly distribute heavy loads over bridges and culverts. 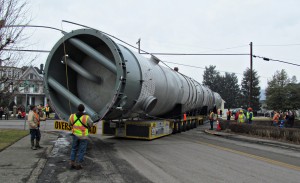 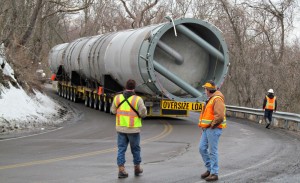 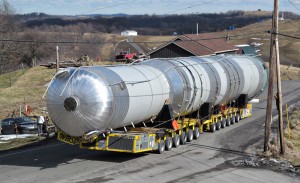