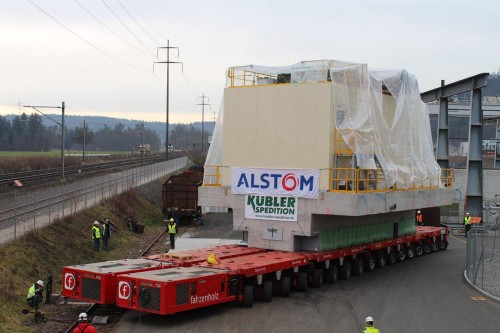 At the beginning of the year the Kübler Spedition, member to the Cargo Equipment Experts CEE network in Germany, received a very interesting request from Alstom Power Ltd, Switzerland, who planned the most difficult transport of their company history thus far within its own test centre. A generator with a concrete drawer should be transported for temporary storage. The dimensions of the unit on hand were 28.20 meters long, 9 metres wide and 11.50 meters high with a total weight of 1000 tonnes.

The task was to take the test generator with a drawer at a height of 130 cm and to transport this construction within the test centre premises. Then the generator together with the drawer on the floor had to be settled down.

The infrastructural obstacles on the test site were another challenge. In addition to bottlenecks, which only left 2.5 centimetres to both sides of the cargo, multiple channels and power lines with a mobile road had to be built over.

Because the uneven ground at the site could accommodate only small forces, a drop off of 860 tons by means of mast or other common hydraulic solutions was impossible (or only with immense effort to be realized).

The solution of Kübler was to move the combinable transport axis under the cargo and use them as hydraulic lifters, so the load over the entire length of the SPMT could be settled down on both sides onto the ground. This solution could be implemented with highest level of security for the cargo and the staff involved.