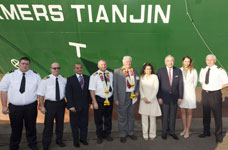 As part of its upgrading programme for its Europe India service, Rickmers-Linie has added the 17,000dwt newbuilding Rickmers Tianjin to the schedule. The base ports served are Hamburg, Antwerp, Genoa, Mumbai and Chennai but the service is capable of serving a wide variety of additional ports on inducement.

On her maiden voyage from Europe, Rickmers Tianjin was named in the Port of Mumbai on 9 January. This is the first time Rickmers has held a naming ceremony in India but it continues a more modern tradition of choosing for such celebrations locations that are important base ports in the Rickmers global network.

The naming was preceded by a puja, a religious ceremony performed in the morning by three Indian priests (pundits) and attended by the ship’s crew, officers and Capt Dadachanji as the representative of Rickmers. The naming ceremony itself took place at 1630 in the port, alongside the vessel, and in the evening, there was a grand dinner in the Taj Mahal Palace Hotel.

Rickmers Tianjin’s sponsor was Mrs Kamini Kotak, a prominent member of the Kotak family which owns United Liner Agencies of India (Pvt) Ltd (ULA), Rickmers-Linie’s general agent in India. Other distinguished guests at the dinner were Mr Rajeev Gupta, Chairman of Mumbai Port Trust and Mr Hazari, Chairman of the Shipping Corporation of India (SCI). There were a total of 30 guests in the port and about 80 for the dinner in the Taj Mahal Palace Hotel.

Rickmers Tianjin and Rickmers Yokohama are 17,000dwt vessels each equipped with two 150-tonne cranes and an 80-tonne crane. This enables them to lift up to 300 tonnes by twinning the two larger cranes.

Being smaller than the nine 30,000dwt vessels operated by Rickmers on its Round-the-World Pearl String service, the ships employed on the revamped Indian service offer greater flexibility to serve ports such as Mumbai – where locks restrict the size of vessels – as well as various smaller ports on an inducement basis. The Middle East Gulf is now being served primarily by the Pearl String service.

Rickmers Tianjin has now joined her sistership Rickmers Yokohama, seen here in the English Channel, on the Europe India Service.