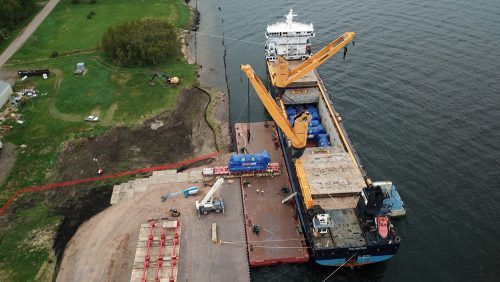 With great anticipation people in L’Anse, Michigan, US were waiting for the arrival of MV Palabora, owned and operated by SAL Heavy Lift GmbH, member in Germany to the Cargo Equipment Experts (CEE) network. The vessel started its journey in Trieste, Italy and carried ten 18V50SG Wärtsilä engines for local power stations. Each engine weighs about 290 tons and measures 14 × 4 × 6 metres. Seven engines will go on to the F. D. Kuester Generating Station in Negaunee. Three are for the A. J. Mihm Generating Station in Baraga.

What seems like an everyday shipment at first glance, in fact needed good preparation beforehand.

Considering that there is no big dock in L’Anse and an extremely low draft of 5.8 metres was required, preparation to accept the ship and its cargo took over a year in planning. Multiple surveys of the bottom of the lake had to be carried out and marine surveyors spent many hours of engineering, project management and communication to realize the shipment and arrival of the engines. Even dredging operations had to be executed. Due to the difficult winter conditions in the Great Lakes, a final sounding of the area was only possible after the engines were loaded in Italy.

Therefore four different alternative discharging plans had been made, from which the most optimal was chosen after the sounding result came in. Furthermore the stowage, bunkers and other important variables had to be carefully planned by our experts to meet all requirements. The final mooring arrangement in L’Anse was carried out with the help from the client of SAL who arranged spacer barges to ensure the vessel stayed clear from all shallow points. Additionally, several poles and even an excavator served as temporary mooring points. With final shore side operations completed, the engines arrived safely at their destination and can now deliver power to the local communities of L’Anse.