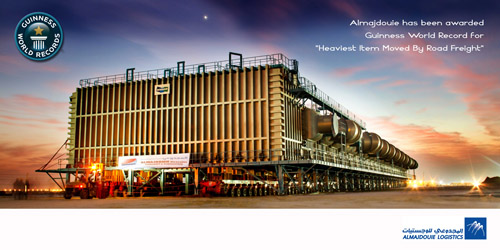 We have the pleasure to inform that Almajdouie Group LLC, Saudi Arabia, is the first Saudi Private Company to be in Guinness Book of World Record.

Almajdouie Group started in 1965 as land Transport Company with a single truck but through the years, it flourished into a group of companies with diverse activities namely automobiles, manufacturing, logistics and real estate.

On 25th September, 2012 The President of Almajdouie Group, Mr. Abdullah Almajdouie and Vice President Logistics Mr. S. I. Mustafa received the certificate as Guinness World Record Holder for “Heaviest Item Moved by Road Freight” from the Managing Director of Guinness World Records, Mr. Alistair Richards in Dammam. The Gala ceremony was arranged in Sheraton Hotel to celebrate the historic achievement, which was attended by more than 500 figureheads from the logistics industry.

Almajdouie Logistics Company has been awarded the Guinness World Record for the “Heaviest Item Moved by Road Freight”. The award is based on the transportation of eight (8) evaporator unit each unit weighing over 4891 tons from the manufacture in South Korea to delivered project site in Saudi Arabia. The combined weight for all the units will exceed 41,000 metric tons.

As a sheer feat of engineering, the ambition and execution of the plant is breath taking. Observing the whole process from construction and assembly in Korea to its installation 4,700 miles away in Saudi Arabia is a visually powerful story that will capture the viewers’ imagination and create a sense of awe.

The engineering miracle of Ras Al Khair desalination plant Inspired by the desert, funded by the Saudi’s at $1.5bn, built in Korea, shipped in one piece, turning saltwater into 228 million gallons of drinking water a day, enough to provide the drinking water needs of 3.5m people.

The Ras Al Khair desalination plant made headlines recently when one of its 8 condenser units became the biggest load ever transported by road. The record was broken as the unit (larger than a football field) was rolled off from the ship that had transported it from the assembly plant in Korea at the tailor made port in Saudi Arabia and then driven 2 km along desert roads for installation at the plant.

When it becomes operational in early 2013, the plant will be biggest desalination plant in the world. It’s the story of cutting edge engineering, technology and logistics coming together to deliver the single most precious commodity on earth – fresh water – on a game changing scale. It is a glimpse of a brave new future happening now; the wherewithal to quench the thirst of millions and turn deserts green.

But the story is bigger than that. As the world’s population tops 7 billion and the control and access to water is predicted to become a greater source of conflict than oil, desalination on this scale is a man-made solution to a man-made problem.

It begins with an almost incomprehensible engineering challenge – the mastery of new technologies on an unprecedented scale – and ends with one of the most emotive sights on earth – crystal clear, drinking water gushing from a tap, into a glass and raised to be drunk.

Since the beginning of 2012, Almajdouie has moved five (5) of these units of same size and are in the process of moving the last three (3) Evaporators by the end of this year.