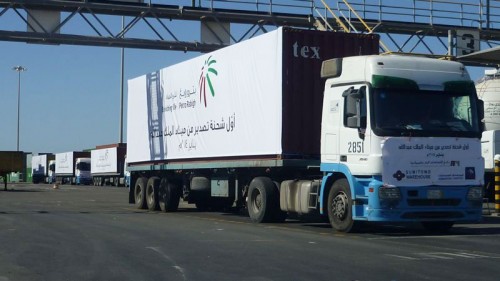 Being a Logistics partner for PetroRabigh, Almajdouie Logistics took a pride to shuttle the first shipment of 54 containers to KAP. The movement started on 2nd January, to fulfill the requirement for vessel: MSC DANIELA based on ETA 5th Jan 2014.

The shipment represents the first export operation of the King Abdullah port. The cargo, which consists of 54 containers of polymer material, was shipped on board a carrier heading to Singapore. “The port is an important infrastructure investment which is, among other things, aligned with Saudi Arabia’s strategy of developing downstream industries so as to drive value and job creation,” commented Jarmo T. Kotilaine, a regional analyst.

Abdullah bin Saleh Al-Suwailem, president and CEO of PetroRabigh, said: “The shipment is a significant step forward in the export operations of PetroRabigh products due to the proximity of the port to the headquarters of the company’s operations.”

It would contribute to the reduction of logistics costs for freight, accessing global markets faster, and relieving congestion at Jeddah Islamic Port, he said in a statement to Arab News.

Almajdouie Logistics is engaged nearly 5 decade and pioneering the regions logistics industry. The Group President Mr. Abdullah Almajdouie stated “the start of new port will ease the congestion at Jeddah Port and Jeddah City but we have long way to go”.

King Abdullah Port (KAP) is Saudi Arabia’s newest port facility and the first privately owned and funded port in the country. The port is being constructed at King Abdullah Economic City (KAEC), along the Kingdom’s Red Sea coast. Located just 100 kilometers north of Jeddah, King Abdullah Port is strategically located to serve the East-West trans-shipment of cargo as well as the domestic volumes. Port Area is 15 million m2 approx., and its capacity on completion would be 20 million TEU approx. and over 30 deep water berths.