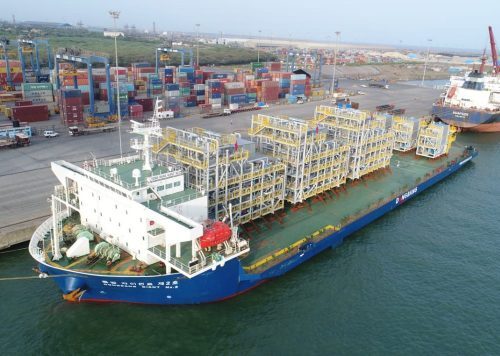 All the heavy-lifts are always brought to the Adani Port, Hazira on Dumb Barges and loaded onto self geared vessel but Total Movements, after detailed study and engineering, proved all the relevant parties for the feasibility of this operation and set a milestone by successfully accomplishing the same. This has been well acknowledged by other EPC’s /manufacturers as well and will be very beneficial for the industry.

The vessel MV Dongbang 3 berthed at the CT2 jetty on the 4th of June 2018. The roll-on operation was complicated as the centre of gravity of the cargo was uneven and Hazira Port, being a tidal port, matching the level of the ship with the berth was a challenge. In addition, the gap between jetty and barge was as high as 4 metres and to overcome the same, Total Movements had prepared specially designed ramps which could take the load.

The engineering team of Total Movements deployed a suitable SPMT combination to roll-on this complex piece of cargo on to the vessel. The roll-on was done under the supervision of Total Movements’ experienced Project Manager and DongBang team within a very tight schedule of 24 hours. Total Movements state: “We are thankful to Mr. Gopinath Phargade of Fluor Corporation who has guided us with his immense experience and engineering back up to make this operation successful”.

With the in-house equipment like SPMTs, coventional axles, barges and other huge equipment, added with in-house Engineering Team put Total Movements ahead of competition by providing an out of box solution at most competitive rates in today’s challenging market. 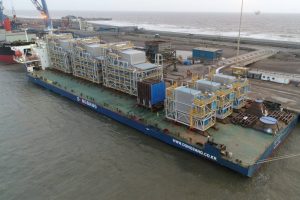 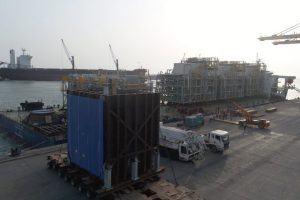