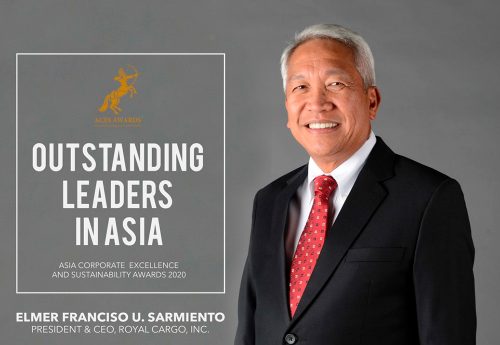 The Outstanding Leaders in Asia award is given to exceptional leaders who have demonstrated sound leadership to spearhead growth and prominence for the company.

Elmer, in his over 40 years of service with the company has brought milestones for Royal Cargo. He is the forefront of the company’s projects and heavy lifts units, which is now recognized as one of the industry leaders in the industrial projects and heavy load transportation in the Philippines. Also, as he is known for making calculated risks, Elmer started the expansion of company operations by acquiring assets and integrating other businesses to reinforce and strengthen the company portfolio.

Elmer is highly respected by colleagues for his business acumen and genuine compassion for his employees. He is a perfectionist who strives for excellence in all of his endeavors. His character has inspired fellow coworkers to always give their best shot. In 2015, Royal Cargo’s project transportation unit was named Best Project Logistics Services Provider in the Philippines by Frost and Sullivan. Thanks to Elmer’s leadership and guidance, these are key ingredients in building a culture of excellence within the company.

He is a firm believer of embracing change and learning to thrive in the roller coaster of transition. This principle inspired the company to power through the biggest obstacles and failures, and enabled Royal Cargo to establish its position as one of the industry leaders in the field of transportation and logistics in the country.

“It is such a great honor to be chosen as one of the Outstanding Leaders in Asia. Over four decades of my hard work and determination to bring the company to where it is today, has now been noticed by the ACES Awards,” said Mr. Sarmiento. He also promised to continue the programs he started to ensure that Royal Cargo will provide top-notch and quality end-to-end logistics solutions for its clients.

Mr. Elmer Francisco U. Sarmiento is an elected member for the Board of Advisors of Worldwide Project Consortium (WWPC).

Screenshot of the live announcement of winners from the ACES Awards 2020 YouTube channel: