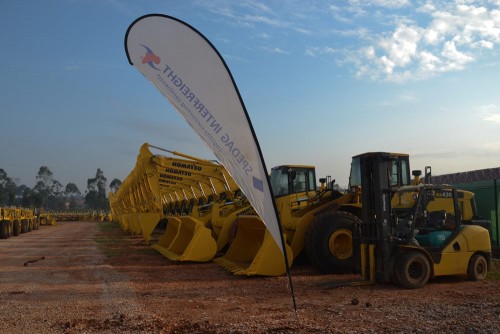 Nobody was more surprised than Spedag Interfreight’s Project Manager in Uganda, Ms. Florence Namajanya when she suddenly found herself the center of attraction of His Excellency the President of Uganda, Mr. Yoweri Kaguta Museveni at the occasion of the Commissioning Ceremony of the Japanese road construction equipment in Kampala.

Gathering for the photo session at the end of the ceremony at Spedag’s storage facility in Kampala, Ms. Florence Namajanya suddenly found herself being nudged to the center of the group by His Excellency.

The development and maintenance of an adequate road system, deep into villages, has been a focus area for Government of Uganda for some time. Districts were encouraged to open up and maintain roads and were facilitated with funding to buy the much needed equipment. However, uncoordinated procurement processes led to acquisition of wrong or substandard equipment of multiple origins. Thus making equipment maintenance costly and jeopardizing the purpose for which the machinery was bought in the first place. Many crucial roads remained in a sorry state.

In 2015 therefore, Mr. Museveni initiated discussions with the Government of Japan. The purpose was to put in place a single source procurement of suitable road construction and maintenance equipment as well as a fleet maintenance agreement. In doing so, equipment specifications would be aligned and established on a country wide basis. Procurement and stock keeping of spares would be made easier, and long term maintenance of equipment could be made cost effective and sustainable.

The negotiations were successful, and in the same year, a general understanding was found. Procurement of equipment was facilitated under a loan agreement entered between the Government of Uganda, the Japanese Bank for International Cooperation (JBIC) and Sumitomo Corporation, a leading and worldwide operating Japanese trading house. Under this agreement the procurement of 1,150 units of various types of road construction equipment for Ministry of Works and Transport was concluded. It covered items like motor graders, bulldozers, wheel loaders, compacting rollers, tipper trucks and their essential spares, from reputed manufacturers like Komatsu, Sakai, Tadano, Mitsubishi and others.

Sumisho Global Logistics and Spedag Interfreight, member to the Worldwide Project Consortium (WWPC) for Uganda, were entrusted with the logistics contract to move the equipment from various sources in Japan and Europe to Kampala in Uganda. The logistics segment is being executed in a partnership between the two companies. Spedag Interfreight’s scope of work is the safe movement of equipment from Mombasa to Uganda into a yard in Kampala dedicated for this project.

In early June 2017, Spedag Interfreight was notified by the Ministry of Works and Transport that on the following day, the President of Uganda his Excellency Yoweri Kaguta Museveni, would officially commission and hand over the first batch of equipment at the Spedag yard. Meaning on Friday 9th June, which was Heroes’ Day (a public holiday in Uganda), at 08.00 hours in the morning.

The team of the Ministry of Works and Transport, Komatsu, Sumitomo, the Presidential Security and Spedag Interfreight worked the whole night to make sure that the ceremony would be a success.

The President had many photo opportunities with government officials, the Japanese counterparts including His Excellency the Ambassador of Japan to Uganda, and staff of Spedag Interfreight. As he left the yard to proceed to the national ceremonies marking Hero’s Day, he looked back to where Spedag Interfreight staff stood and walked back and shook hands with Ms. Shirley Nafula, one of Spedag’s staff in the Project Department, as if to acknowledge the good work done by the team. 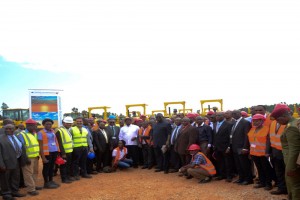 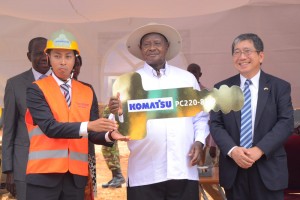 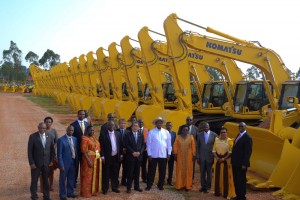 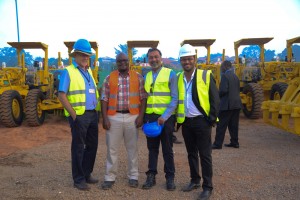