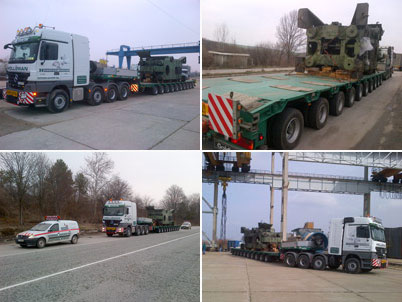 Holleman Bulgaria LTD, member to the Cargo Equipment Experts CEE network, performed a transportation of a big press in Bulgaria during February 2013. The purpose was to transport 120 t press from production factory in Ruse to Port of Belene, reload it on a vessel and deliver it to the Port of Antwerp. The dimensions of the press were L 7,50 m x W 3,10 x H 3,10 m. The transport was performed using a 4-axle Mercedes and 10-axle Goldhofer semi-trailer combination.

The press was situated inside a production hall with many obstacles, especially small curves and limited distances for above-mentioned transport configuration. The press was lifted by 4 hydraulic jack and iron beams. The loading process took more than 6 hours and the main role was played by the hydraulic system of the 10-axle Goldhofer semi-trailer.

The dimensions of the loaded composition were: L 26,00 x W 3,10 x H 4,20 m / 165 tons total. The transport stared on 16.02.2013 from Ruse. Prior to the operation a bridge inspection was done as there were 3 critical moments – passing via 3 bridges on the route. On each of the bridges a police escort for stopping the traffic was arranged in order to allow the loaded truck to pass the bridges alone.

The unloading on the press in Port Belene was done using a 250 ton gantry crane. Special dunnage for the river transport was prepared in advance in the Port of Belene.

On 24 February the press was reloaded on a river vessel for further transport to Antwerp.