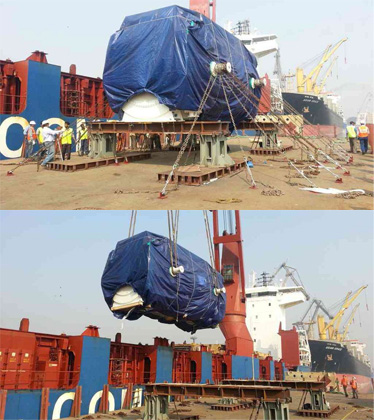 Allcargo Logistics in India has bagged the contract from TATA Projects Ltd for transporting generator from Mumbai port to Bhagad in India. To execute the project Allcargo Logistics has been assigned responsibilities of transportation, customs clearance and port handling of generator. Generator was heavy as 218 MT, having dimensions 8.6m X 5.3m X 4.4m.

Allcargo reports the operations as following:

Unloading of generator from vessel to barge
Cargo was unloaded from vessel, MV Palessa, using two cranes of the ship in tandem operation on the barge alongside the ship. Stools and beams perfectly welded to match with the saddle positions and ensured no wastage of time in any adjustments. Entire operation was under supervision and control of Allcargo Marine department.

Lashing of generator on barge
Generator was perfectly received and placed on the pre-welded stools & beams. 28 lashing points were used to secure cargo on the barge.

Jetty preparation
Dredging and cutting jetty walls were done to align barge perfectly with the jetty. Specially fabricated T-shaped steel plates & base plates used to safely roll-off trailer from barge and to provide grip to axles.

Beaching of barge and alignment with jetty
During high tide the barge was pulled towards the jetty and perfectly aligned with the jetty for cargo roll-off operation.

Transportation from jetty to Bhagad site
Trailer carried the generator through the Roha Town, Maharashtra, which had a lot of overhead service lines were cleared with precision and the generator was transported with the use of two powerful Volvo pullers.

Generator delivered safely at site
Generator unloaded safely from hydraulic trailer on beams & stools, we provided additional two more stools for the safety of the cargo.

Safety first always
Vessel operators pressurized our team to unload the cargo on to the barge after sunset but Allcargo doesn’t compromise on its safety, we didn’t budge to this pressure but instead followed our safety guidelines and carried out the operations the next day.