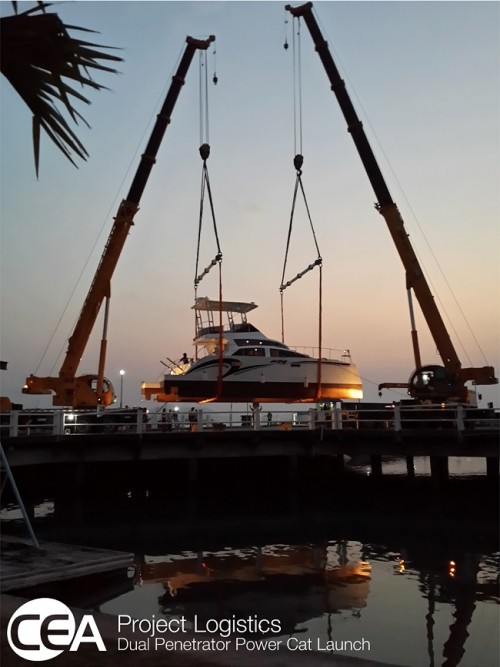 CEA Projects (Cranes and Equipment Asia Co Ltd), also recently launched another Catamaran, which is fast becoming their specialty. This was a potentially difficult project which involved three separate lifts.

Mr Earl Brown, Business Unit Manager at CEA Projects explains; “Five days before launch date, CEA had visited the boat yard to formulate strategies with the boat builders which would ensure a safe and efficient execution. After several measurements had been taken it became apparent that upon departure from the yard the boat would not pass safely through the main gate, after inspection of the gate and the immediate fencing it was agreed that the best possible solution was to lift the boat over the fence onto the road below.

A beautiful clear day greeted the CEA team as they arrived at the boat yard in Rayong province. The team quickly got to work positioning two 50 ton cranes either side of the boat and assembling the Modulift spreader bars with the necessary slings. The first lift involved lifting the boat off its cradle and placing it gently onto four support stands, while the boat was in lift the cradle was pushed out to allow room for the CEA multi axle hydraulic trailer.

The trailer was carefully reversed under the boat, chocks and rubber mats were placed under the agreed load points to ensure optimum weight distribution during transportation. The trailer made the very short journey across the boat yard and placed perpendicular to the fence. The second lift began by raising the boat off the trailer, the trailer then moved out of the yard and positioned itself on the road ready for the next stage. The cranes working in tandem turned the boat until it was parallel with the fence then slowly moved it over the fence and lowered it for a second time on to the four support stands.

The trailer reversed underneath the boat and the previous process was applied once again, the boat was then strapped and secured ready for the 30km journey to the marina. As this was an abnormally wide and high value load CEA employed the services of the local Highway Police to escort the convoy ensuring the safety of all road users.

On arrival at the marina the cranes assumed their position for the third and final lift, as the boat made its way down the main thoroughfare a crowd had gathered to celebrate in its launch. The boat was placed in position and just as the Siam sun began to set the final lift began. The boat was lifted up and across the marina barriers and slowly lowered into the water below, as the boat touched the water for the very first time cheers rang out from the gathering crowd, a few nervous moments followed as builders, designers and more importantly the owner of the boat waited to see if she floated!!

CEA are happy to say that the boat sat perfectly in the water and all involved were relieved and very happy with the outcome. The CEA team then unhooked all straps and carefully retracted them from the water to be packed away. All in all another great project executed professionally.”