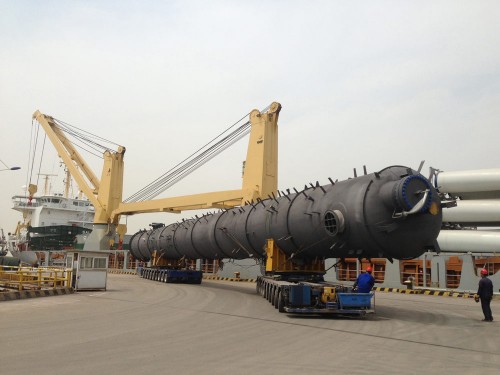 InterMax, CEE network member in China, had successfully finished loading of 22 reactors from Zhangjiagang to Jubail. There were three main reactors which are 47500*3900*4800mm with weight 294 tons. They were over-sized (47.5M long) and over-weighted (294tons) which required special attention on delivery.

At the first stage, staff from InterMax went to factory with client to discuss deliver plan and made road survey to ensure the routing from factory to the port would be carried out smoothly.
The delivery was carried out without delay. Each reactor needed two set of PPU. Trailers were delivered to factory on the first day and ready for loading. There were two cranes to lift the reactor and after two days, all reactors were loaded on the trailers. As the reactors were over-length, they were delivered at mid night. InterMax were able to deliver them at the night and they were sent to the port in the morning and ready for loading on vessel.

After customs clearance, two days later the vessel berthed at Puxi Port at noon, the reactor was loaded on the same day and the remaining two reactors were loaded on the following day in the morning and the vessel departed.