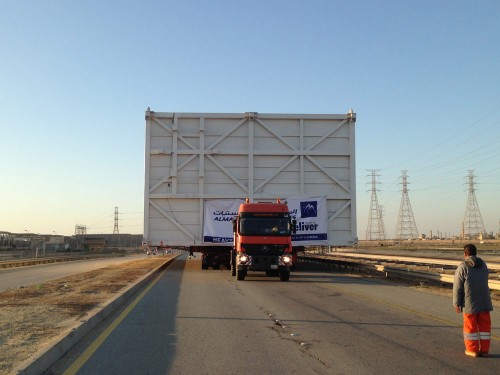 MLC succeed to win the job out of tough competition for carrying out customs clearance & transportation of bulky cargoes namely Cold Boxes. These units were manufactured by Linde Germany for their Hyco / Ammonia Industrial Gases Plant within the premises of SADARA, Jubail, KSA.

Cold Boxes weighing 358 ton each with the dimensions of 31.19 x 13.9 x 9.5m (LWH) were like an apartment to move by road. It was indeed challenging to handle it safely, MLC Engg., team worked out minutely considering all its critical aspects & suggested to move using 18*2 (36 axle hydraulic trailer). Cargo was safely received from the vessel gears @ Jubail Industrial Port & safely jacked down using specially designed Beams & stools.

Upon instant customs clearance, moving such a bulky cargo out of the port was again a risk considering the narrow & two way road inside port. However, MLC supervisors found an alternate route which paved way without disturbing the routine traffic, but had to remove many fences & barricades for its movement. Authorities were consulted & obtained prior permissions to remove & cold boxes moved out of port.

Still the haulage to the job site was due which indeed could be possible only upon convincing the Royal Commission with the safety, ground bearing capacity, their engineering study etc., finally succeed to get permission after all processes & deliver both units by removing several lights poles on the way & finally both units delivered safely within the targeted time frame from Linde KSA.