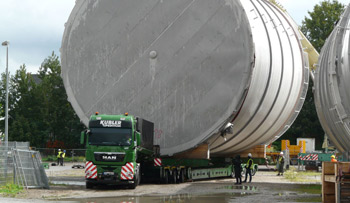 Gigantic tanks were assembled in the Kuebler’s Heavy Lift Terminal in Mannheim Rheinau, Germany by Kuebler Spedition, member to the Cargo Equipment Experts CEE network in Germany. The components were so gigantically large that a transport on the road was inconceivable.

The company “Inter Terminal Mannheim GmbH” ordered six enormous storage tanks with a diameter of 12.5 m at the company Müller from Gernsbach. A transport of this order of magnitude is feasible only by inland waterway craft. Therefore the company Müller decided to build the tanks at Kuebler’s Terminal at the Rhine in Mannheim Rheinau. Kuebler offers wide assembly surfaces with direct connection to the inland waterways to its customers.

For the barge transport of the six enormous tanks an extra large ship was chartered from the Netherlands, since normal ships except only load width of 8 to 10 m.

With a Kuebler owned and operated 12-axled heavy property vehicle the tanks were driven from the assembling place to the quay crane and lifted with the port mobile crane into the extra large ship. 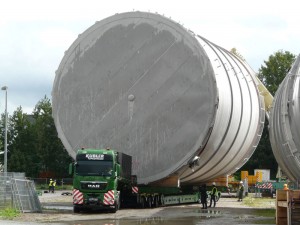 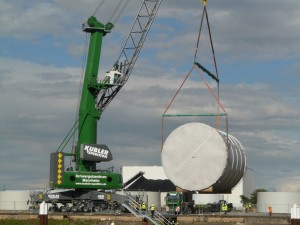