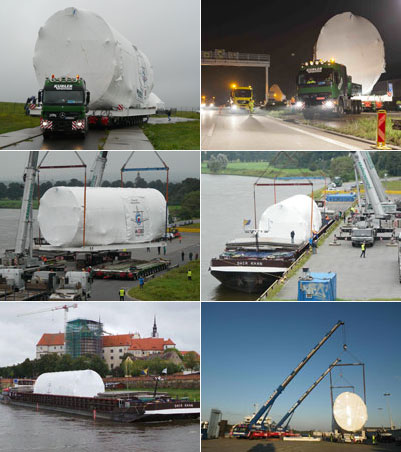 Kuebler Spedition, member to the Cargo Equipment Experts CEE network in Germany, received mid 2012 an interesting transportation inquiry from the aircraft manufacturer Airbus. The transportation feasabillity study should be examined by building a section of the large-capacity aircraft A 380. With 8.50 m broad and 9.30 m height no easy venture on the relation Dresden – Hamburg.

A goal was to reach, with as few measures and handicaps as possible, the Dresden port and to begin from there the journey with an inland waterway vessel on the Elbe until Hamburg. At the end of 2012 Kübler Spedition won the European-wide tender and could plan the transportation execution for the mid of 2013.

During the summer of 2013 the transport operation was suddenly stopped by the heavy flood along the Elbe River, Kübler acted still during the flood phase flexibly and set the elements from operating grounds on an alternate stock pile. So all following work could be resumed with the sender despite floods in time.

After a two-month break the level of the Elbe had again so far stabilized that one could place prognoses. At the end of September transport operations could resume.

Slalom on the motorway

Because of some signal-bridges the carriageway was changed five times directly over the centre strips. This slalom could be implemented precisely, because at all five crossings the protective planks were dismantled before and in three places steel plates where placed into the becoming green tires. Changing of the roadway within ranges became critical, as the roadway exhibited a difference in height of 40 centimetres. Owing to good reconciliation at the platform car however all transitions could be crossed briskly and surely.

In the further process along the distance tramways had to be crossed and urban roads width and height had to be measured each meter centimetre-exactly. Traffic lights and lamps were continuesly excavated, as well as turning the arms of many lamps around 90° from the road profile.

After eight-hour travel the port was reached on Sunday morning, and the crew could recover up to the transhipment.

On the Elbe to Hamburg

The transhipment took place at the heavy property loading plant in the port Dresden. Here two mobile cranes at the dock were settled and the segment was set carefully from the trailer into the ship. The smaller cockpit was also lifted as additional load into the cargo hold.

In recent times, if the flood water level was a problem, low water level was set as start of operations on the shipping day. Now fast acting was demanded, since the waterlevel prognoses did not promise improvement.

After a one-week journey the inland waterway barge arrived in Hamburg at the dock of the Airbus premises. After two hours the large section had been discharged onto an industrial elevating truck platform from Airbus and handed over thus to the client.