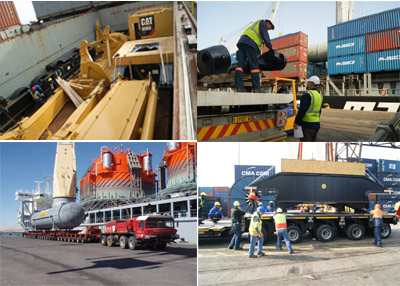 Manica Group Namibia, exclusive member for Namibia to the Worldwide Project Consortium WWPC network, has seen a steady increase of break bulk cargo flowing through the ports of Walvis Bay and Lüderitz. A large volume of these heavy cargoes are destined for the surrounding mines.

Of note was the heaviest shipment of plant equipment that was ever offloaded at Namibia’s southern port of Lüderitz. The Manica subsidiary, Lüderitz Bay Shipping and Forwarding (LBSF) handled the clearing and forwarding of this hefty load weighing 335 metric tonnes. The initial cargo comprised two heat exchangers and a second shipment steam turbine (143t) and a generator (108t). These parts are used in the construction of the Khi and Kaxu solar plants erected at Pofadder and near Upington in the Northern Cape. In the latest shipment a steam accumulator had to be lifted with two 1000t cranes.

According to the General Manager of LBSF, John Gillham, Lüderitz was the preferred choice to offload the parts, despite some doubts by the clients. “The overriding factor was the favorable and less congested route. So they opted for Lüderitz. However, there was skepticism about the port of Lüderitz and our ability to handle such a heavy load. We were able to offload this large consignment within two hours having stabilized the vessel with a port tug. The client was impressed with the operations and advised that future shipments of this nature would be headed for Luderitz,” he added.

This unusual cargo also caught the attention of the local media, as the load was almost as wide as the full width of the road. A special 70m long and five meter wide trailer with 28 axels and 336 tyres was used to carry the load. Three high-power trucks with their own drivers pushed and pulled the trailer driving at speeds of 10 to 20km/h.

It was reported that about R700,000 was spent on improving the road infrastructure between Ariamsvlei (borderpost) and Lüderitz to accommodate the load. This included strengthening two bridges, broadening the traffic circle at Keetmanshoop, broadening the road at Grünau while a detour had to be built at the Ariamsvlei border post.

At the port of Walvis Bay, a birthday present with a price-tag of R48 million was shipped on the Gal vessel, MV Sophie, from Jacksonville in the USA and offloaded into the Walvis Bay harbour. The birthday present was a 27m luxury yacht weighing 68 tonnes. Special equipment had to be fitted onto the MV Sophie to lift the yacht, while representatives of Macs Super Cargo, the client, the yacht Captain and a surveyor ensured that the present was loaded carefully. Walvis Bay Stevedoring handled the lifting operations.

Manica’s Walvis Bay-based clearing subsidiary, Woker Freight Services also dealt with some heavy equipment destined for a local mine. One of the largest hydraulic CAT shovels, the 6060FS, was offloaded in more than 50 parts with a total weight of 636 metric tonnes. WFS also handled a CAT 7495 shovel. These particular beasts are used to load overburden and ore into haul trucks during the mining process in surface mines of all types. The heaviest part was a structure frame weighing 63t.