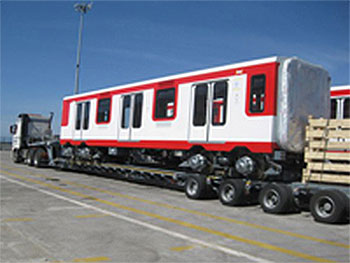 Multitrade Spain has been awarded the second contract of 108 cars for metro line in Santiago de Chile.

In the picture attached one of the 180 cars moved in the first contract.

The first shipments will start second half of 2012 and Multitrade Spain will follow the same procedure used for the first project. Covering the full scope of transport from factory in Spain to site in Santiago de Chile.

With this project Multitrade Spain is actually moving 689 cars and wagons in Africa and to Latin America for various projects.