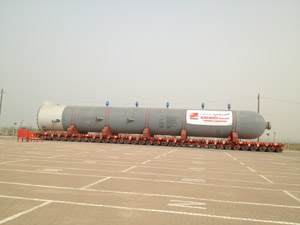 Almajdouie Heavylift and MPSC (a joint venture between Almajdouie and Fagioli) have made another safe and successful move in the western region of Saudi Arabia.

The heavy reactors had to pass over seven culverts along the main access roads within the Royal Commission premises. Almajdouie’s in-house team fixed sufficient scaffolding supports underneath the culvert, as per the engineering specifications, to ensure the safe traverse of the cargo over the culverts.

In project logistics, Almajdouie has experience of over five decades serving local, regional and international clients. In this time Almajdouie and its partners and joint ventures, like MPSC, have become expert in the engineering and transportation of unusual, heavy and over-dimensional cargo, which have to take into account many varying factors like route suitability, permits, stability, weight distribution and dimensional analysis in order to perform the many thousands of cargo deliveries performed over the years.

In recent times Almajdouie and MPSC have moved the world’s largest evaporators weighing nearly 5000 tons each, at the Ras Al Khair Project in the Eastern Province of Saudi Arabia. Also successfully completed in recent times was the landmark project to transport 1,293t bullet tanks on a special route from Dammam to Jubail, a total distance of around 150km on Self Propelled Modular Trailers.

Good planning and coordination plays a vital role in such movements. The team, in collaboration with its client, assess potential risks and difficulties and undertake road surveys prior to planning a transport route; and assessing the most appropriate specialized equipment to be used for the completion of the project.