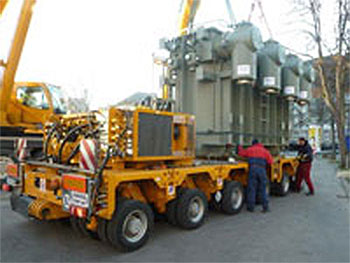 Scheuerle offered an unusual spectacle to spectators on the Platz der Deutschen Einheit (Place of German Unification) in Wiesbaden. A 76 t transformer was loaded onto a platform trailer combination with 2 mobile cranes. This involved a SCHEUERLE vehicle combination consisting of a 4-axle InterCombi PowerBooster (PB) and a 2-axle InterCombi module. A particular feature of this SCHEUERLE vehicle is that it is not only pulled by a prime mover but – thanks to the PowerBooster – can also be used as a self-propelled transport unit or as an additional pusher machine. Thus, the PPU drive is automatically activated when the speed falls below 14 km/h which ensures that there is sufficient driving force as required.

In Wiesbaden, the PowerBooster was used as a self-propelled heavy duty vehicle. The towing option would not have been possible here due to the existing space conditions. The transport was carefully manoeuvered by remote control between parked cars on both sides of the street up to the entrance of the substation. This particularly narrow entrance to the facility could easily be negotiated due to the excellent manoeuverability of the SCHEUERLE InterCombi and the 60° steering angle. Once at the transformer box, the load was pulled into its final position with the help of rope winches using rails which were mounted under the transformer wheels.

For the delivery of the SCHEUERLE InterCombi PB axles, no additional transportation costs are incurred. The InterCombi PB unit is simply coupled to conventional InterCombi axles and can be driven as a pulled unit both on rough terrain as well as on public roads and motorways with speeds here reaching up to 80km/h.