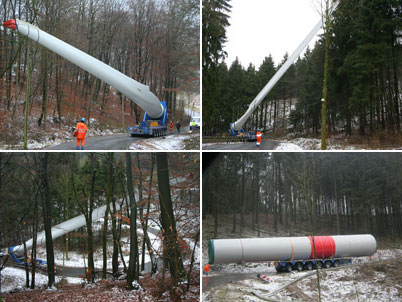 Transport Equipment used by SCHEUERLE Fahrzeugfabrik, mastered a very impressive assignment which took place in heavily wooded terrain. Three rotor blades and a number of other components of an ENERCON E82 wind power plant were successfully transported to their final destination along narrow and steep forest tracks. The first journey with one rotor blade had to be interrupted due to the onset of dusk. This meant that the vehicle combination complete with the giant blade was forced to park overnight in the middle of the forest on a 15% incline.

In Borgholzhausen / Gewann auf der Johannisegge, Germany a self-propelled 6-axle SCHEUERLE InterCombi SP with rotor blade adapter stood poised ready to handle a 40-metre long ENERCON E82 rotor blade weighing around 9 tonnes. The specially-designed adapter is equipped with 200 holes for accommodating the flange bolts of the wing. The rotor blade was lifted into position by crane and secured to the vehicle in a very short time. By means of a remote control, it is possible to raise the blade up to an angle of 23°. This function was crucial for mastering the 2 km long route to the installation site of the wind power station.

The over 40-metre long vehicle combination began to move out. Before reaching the first bend, the rotor blade was raised. However, the vehicle negotiated this obstacle without any major problems. The second bend involved a so-called “hairpin bend” which proved to be much more time-consuming than initially thought: a dense arrangement of trees and a slope of 15% together with cross-gradient of 8%. At first, some tree felling was required. In addition, fog and icy ground conditions delayed transport operations which meant that the gritting vehicle had to be called into action on numerous occasions. In spite of the repeated use of grit, scattered sheets of ice still remained on the forest track. However, thanks to the anti-skid control feature integrated in the vehicle, even these stretches could be safely handled without any problems. After dealing with these time-consuming interruptions, the Voser team manoeuvred the wing through the tight bend with a 12.5 m cornering radius with the help of the 60° steering angle of the SCHEUERLE InterCombi bogie units as well as the lifting function of the rotor blade adapter. Shortly after this, the light began to slowly fade so by the time darkness had set in, only a few hundred metres had been covered. It was at this point that the vehicle combination together with the rotor blade parked overnight on a 15% gradient.

Next morning, transport operations continued. After further tree felling work, the team smoothly mastered the second hairpin bend. Subsequently, the two remaining blades could then be transported upwards in record time. The remaining components of the ENERCON wind turbine could also be taken up to the installation site very quickly – the team only required 40 minutes per trip.