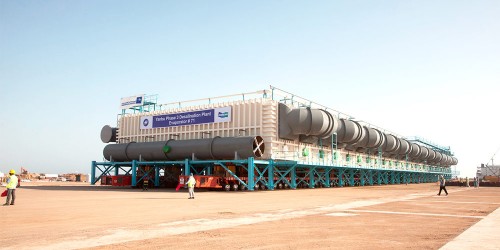 On May 22nd, 2014 Almajdouie Logistics has transported an Evaporator weighing 5,736.8 tons (gross weight during transportation), and believed to be the world’s heaviest, at the Yanbu 3 Desalination Project, Kingdom of Saudi Arabia.

A total of six Evaporators will be transported by Almajdouie Logistics; four Evaporators will be fabricated in Vietnam and shipped to the site jetty at Yanbu, where they will be rolled off the vessel and transported to the foundation by use of Self Propelled Modular Transporters (SPMT’s). A further two will be fabricated in modules locally by Bilfal Heavy Industries, and transported to site for assembly. The first Evaporator sailed on 24th April from Dung Quat port Vietnam and reached Yanbu on 18th May, 2014.

On the vessel arrival Almajdouie Logistics were ready at the Yanbu site jetty with their transportation team, along with 200 axle lines of SPMT’s and 6 Powerpacks, to execute the roll-off operation and to install the giant evaporator, with Dimensions (L x W x H) 137.9 m x 32.1 m x 11.4 m, to its final location at the SWCC site.

After the berthing, custom clearance and removal of seafastening procedures, a steel plate bridge was placed between the vessel and the jetty to facilitate the roll-on of the SPMT’s, which were already fitted with temporary intermediate steel supports. After the jack-up of the Evaporator using the SPMT’s integral hydraulic system, the roll-off procedure over the steel plate bridge began in conjunction with the vessel ballasting to maintain the level of the barge to the jetty, with constant close coordination between the vessel and transport operations teams.

Proper planning and safety are very important in such projects, with method statements, transportation drawings, stability calculations and coordination meetings beginning from several months before the actual operations began.

Doosan Heavy Industries & Construction is to build the Yanbu Phase 3 Seawater Desalination Plant under a contract worth US$ 1 billion from the Saline Water Conversion Corporation of Saudi Arabia.

The Yanbu 3 multistage flash (MSF) plant will be built 350 km north of Jeddah to supply fresh water to the industrial city of Yanbu and the nearby Medina region. The plant will deliver 550,000 m³/d of water, sufficient to meet daily requirements of 1.8 million people. 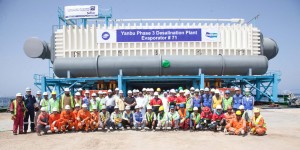