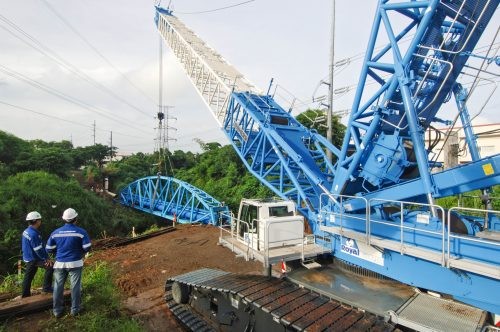 With a total weight of 72 tonnes, the two units of pipeline bridges with length of 40 meters and 10 meters and radius of 46 meters and 20 meters respectively, were carefully lifted using Royal Cargo’s newest and biggest heavy lift crane for the first time.

“The team was able to finish the lift in just a short period of time despite various challenges,” said Mr. Albert Nanez, the Operations and Safety Manager of the Laguna Water project. “Time is of the essence on any lifting project, but it should never be the driving force at the expense of safety. The operation was completed with the highest regard to all safety and environmental aspects according to the initial plan,” he added.

Royal Cargo acquired this 600T Liehbherr crawler crane last April along with a Liehbherr LTM 1500 – 8.1 (500T) mobile crane to support the consistently increasing market demand in the Philippines for Projects and Heavylift (PHL) and Crane and Erection Division (CED).

The LR 1600/2 (600T) crawler crane has an outstanding load capacities, variable boom and derrick systems as well as enhanced component dimensions for low cost transport. With its bespoke boom system, this crane is ideal for the erection of wind turbines. It can move on tracks between the erection sites of the various wind turbines with its narrow crawler travel gear.

Royal Cargo Inc. is the exclusive member for the Worldwide Project Consortium (WWPC) for the Philipppines.