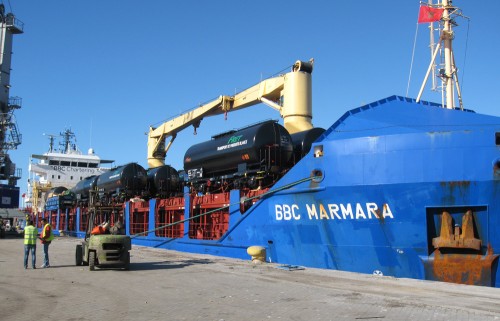 The wagons where loaded at point of origin in Constanta Romania at the UMEX terminal and delivered to Casablanca Port.

The first challenge presented itself in Romania by building the transport beds as the wagons were delivered without any transport skid. Nevertheless the terminal managed to load each wagon including building the bed within 20 minutes per lift.

The second and by far biggest challenge was preparing Casablanca Port to receive the wagons as the terminal in Casablanca. Polytra’s experts went four days before arrival of the first vessel to Casablanca to inspect and prepare the receiving terminal. Adjustments to the terminal’s rail system had to be made to pull away the wagons rapidly in order to safeguard a smooth and fast delivery to avoid vessel demurrage.

From the Czech Republic via Germany to USA

Polytra delivered about 12000 FRT pre-assembled steel structures from CZ-Moravski Krumlov to DE-Hamburg Port for a shipment to Houston USA.Among this were 24 so called “module casings” each 3200 x 400 x 225 cm and each weighed between 36 and 55 ton.

The biggest challenge with this operation was that the trucks had to drive backwards over a distance of a few km from the factory to the highway as they could not make the turn due to length of the cargo. Furthermore Polytra’s team had as little as three weeks to move 68 special trucks from the middle of the Czech Republic to Hamburg Port, Germany, to meet their chartered vessel’s deadline. 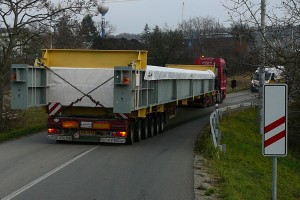 Cargo on the road to Hamburg Port 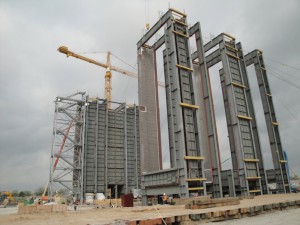 The units in upright position at the jobsite in Texas.