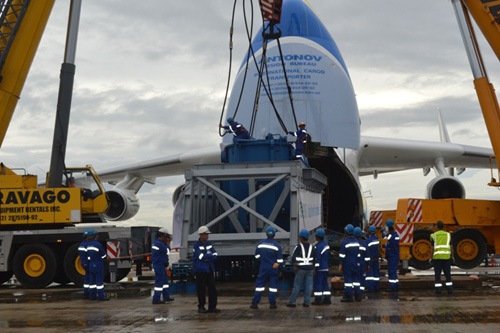 After arriving aboard the largest plane to land on the Philippine archipelago, the 150 ton power generator of First Gen Corporation has been transported from Mactan, Cebu to Batangas by leading heavylift solutions provider in the country, Royal Cargo Combined Logistics Inc., member to the Worldwide Project Consortium WWPC network for the Philippines.

The 150 ton power generator made news in the second half of November when it was airlifted using the Ukrainian Antonov AN-255, the largest plane and the first AN-225 to make its way to the Philippines. The Antonov aircraft weighs 300 ton when empty and can carry up to 250 ton of load.

On www.gmanetwork.com, it is highlighted that the “operation to lift the 150 ton power generator took all day,” which was engineered and executed by Royal Cargo.

According to Lawrence Esteban, project engineer, and Ed Gelano, account owner of the project in a joint interview, “This is another new challenge for our group [since this was moved out from a plane instead of a ship]. Several technical and methodological studies were made and presented to Antonov and our client prior to the arrival of this cargo in Cebu.”

“This is another milestone for Projects and Heavylift because this is history in the Philippines — the biggest airplane in the world safely arrived in our proposed airport and the job was done successfully by Royal Cargo with the help and cooperation of the group’s branch office in Cebu”, they added.

The GMA news article mentioned that “Royal Cargo Combined Logistics will transport the transformer from Mactan to the plant site in Batangas City.”

The generator, which urgently needed to be installed at San Lorenzo Power Plant due to lack of power, was delivered via plane instead of sea transport to hasten the arrival in the Philippines.

The plant is “a critical asset to the Luzon electrical grid system,” writes www.inquirer.net.

The genset first landed on Mactan, Cebu since it was the most viable entry point for the airplane, which departed from Zagreb, Croatia. It was delivered to San Lorenzo Power Plant in Batangas.