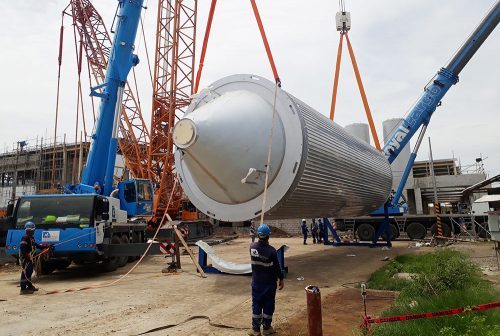 Royal Cargo Inc., member to the Worldwide Project Consortium (WWPC) for the Philippines, teamed up with LS Cargo Logistics China and successfully transported 38 units of fermentation tanks for the construction of a brewery plant in Mindanao, Philippines.

LS Cargo Logistics handled the offshore services from China, while Royal Cargo handled the onshore transportation including unloading and final erection to foundation. The tanks were delivered on time and executed in a safely manner without incident.

The delivery of the fermentation tanks was a challenging and demanding task to the entire team. The transport crew walked about 9 km from the port to the site with the convoy travelling at a very slow pace due to its extra-ordinary dimensions. With travelling heights between 6.2 to 7.2 meters, the transportation required the raising of wires to 7.5 meters minimum height clearance and temporary removal of one concrete footbridge. It also called for power interruptions along the route to ensure the safe passage of the tanks.

Despite the difficulties encountered during the project, the team was able to finish the deliveries ahead of the schedule. “The original plan is to complete the deliveries in 19 nights with 2 tanks per night, but we were able to compress this to 14 nights travelling with 3 tanks most of the time,” said Mr. Copon, Assistant Vice President Royal Cargo. “The transport solution provided by Royal Cargo helped fast-track the project, as the fermentation tanks were directly installed to foundations instead of being fabricated at site that would require more time for the project timelines,” he added.

The fermentation tanks are for a brewery plant which is part of the 50-hectare industrial complex being developed by the country’s biggest producer of beer. 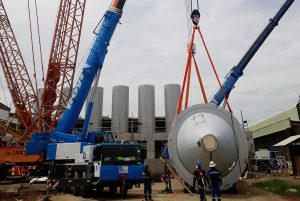 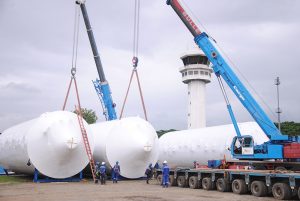 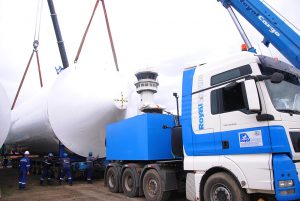