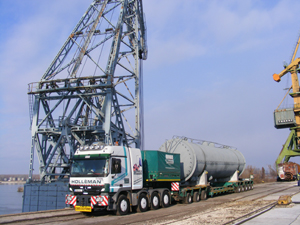 Holleman Bulgaria O.O.D. has completed the delivery of a big boiler measuring 16.16 / 3.60 / 3.84 m and with a weight of 83 tons. The boiler was transported from Bucharest, Romania to Rousse, Bulgaria and reloaded onto a vessel for transport to Germany.

In Deggendorf, Germany the boiler was transshipped again onto a truck which reached the port of Aken where it is waiting for improvement of the weather and re-opening of the navigation on the river Elbe for further river transportation to its final destination in Berlin.